Widely regarded as one of the most talented and polished racing drivers to ever emerge in the oval track arena, Jerry Bunke posted one of Sno-Pro’s most amazing records during his three-year career as a professional driver on the Polaris Midnight Blue Express racing team. An independent USSA racer since 1969, the talented Minnesotan was named Central Division High-Point Driver in 1973 and was offered a berth on the Polaris team in 1975. After a modest rookie
season in 1976, Bunke exploded into the Sno-Pro limelight in 1977 with an astonishing 15 feature victories including the Kawartha Cup title, the Alexandria International Championship and a rare four-class sweep of all Sno-Pro classes at the Wisconsin State Open Championship as well as double-up victories at the Ironwood Olympus and the North Star State Championships.

On the heels of posting both USSA Driver of the Year and Sno-Pro High Point honors in 1977, Bunke continued his charge to greatness in 1978 with a repeat of his Kawartha Cup triumph and a 440 feature win at the Eagle River World Championship. Bunke was poised to have another banner season in his third year as a professional when a competition accident at the Beausejour Power Toboggan Championships ended his life on February 26, 1978 at the age of 26. 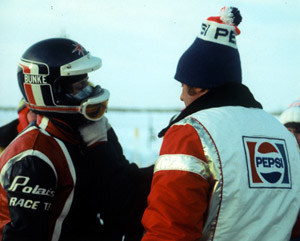